With the help of a leading federal contracting expert, Rafael Marrero, Miguel López Jr. Inc. company has been doing business with Uncle Sam for over four years. See how these entrepreneurial brothers launched a company that has continued to operate for over 30 years, first as a business-to-business firm and now as a business-to-government (B2G) contractor. Review the steps they took to navigate the transition and how Rafael Marrero & Company helped pave the way to federal contracting.

How the Brothers Started Their Journey

Brothers Miguel and Eduardo López got the motivation to work in the field of ​​construction directly from home. In Cuba, their grandfather had a factory of prefabricated parts. In the United States, their father continued to do the same. When he retired, the entrepreneurs created the company Miguel López Jr. Asphalt Maintenance & Site Development, which has been in existence for more than three decades. The company made the Inc. magazine’s coveted Inc. 5000 list as one of the fastest-growing private companies nationwide for the second time. They were recognized because their company had grown tremendously since it began doing business with the federal government.

When the brothers first decided to do business with the federal government, they attempted to pursue the process alone. Miguel recounts attempting to apply for certifications through the U.S. Small Business Administration (SBA). Unfortunately, the rigorous process and daunting paperwork created a lot of stress for the brothers.

After several applications were rejected due to missing documents and other details, they gave up on attempting the process without professional help. They continued to operate a successful business-to-business operation until they met Dr. Rafael Marrero.

The award-winning federal contractor consultant had been recommended to Miguel and Eduardo López. When they decided to meet him, they were impressed by the convenience and efficiency of his services. With the help of Dr. Marrero, their next attempt at SBA certification was approved. They received their first federal contract in November 2016.

Benefits of Teaming Up With Rafael Marrero & Company 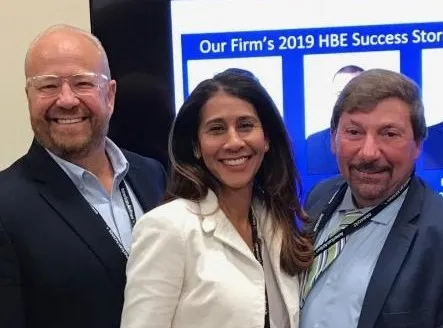 As the founder and CEO of Rafael Marrero & Company, Dr. Marrero is a leading federal contracting advisor. Several Hispanic-led companies are in the process of certification or already growing at an accelerated pace thanks to his experience and advice. He counsels small business owners on the process of receiving certification as women-owned, minority-owned, and veteran-owned companies.

Miguel and Eduardo felt lucky to work with Dr. Marrero from the beginning. They first attended a boot camp where he offered his knowledge of doing business with the government. He helped compare federal contracting practices with private-sector business practices to help the company make the transition successfully.

Connecting With Buyers and Prime Contractors

Dr. Marrero then accompanied the brothers for a year to help make crucial connections within the U.S. government. They traveled to Washington, D.C. to meet with federal buyers and prime contractors. This put them on the right path to winning more lucrative contracts in relevant federal agencies.

Not only did the brothers earn SBA 8(a) certification, which they were struggling to win on their own, but they also received U.S. Department of Transportation Disadvantaged Business Enterprise certification (DOT DBE) as contractors with the USDOT.

The brothers encountered an issue with their bonding capacity. Because they needed to bond projects to guarantee construction jobs, they were initially only able to become approved for $1.5 million per job and $4.5 million in aggregate coverage. This limited their ability to secure key government contracts.

Thanks to Dr. Marrero’s assistance in applying for government-sponsored programs, the company was approved for $10 million per job and up to $25 million in aggregate bonding in 2018. This dramatically increased their ability to win jobs and offer their services to Uncle Sam.

At the same time, Marrero also helped them obtain a loan from the SBA for the construction of a new building in Pembroke Pines, Florida, the company’s headquarters. Thanks to that loan, they now have a 15,000-foot warehouse and more than four acres of land to grow continuously.

With all this help, the company, known as the “King of asphalt in Florida,” has been able to grow at a fast pace from the private market to the federal market, offering these maintenance and construction services:

As a result of this escalation, in just three years of business with Uncle Sam, the company has managed to bring its annual revenue from $7 million to about $18 million. That is precisely why Inc. magazine included them (in 2017 and 2019) on its Inc. 5000 list of America’s fastest-growing privately held firms.

Miguel continues to be thankful for the mentorship, counseling, and support of Rafael Marrero. The company continues to rely on his support as a liaison to the federal government.

In the short term, the company aims to get more federal contracts and reach $20 million annually in revenue. Miguel and Eduardo are confident they’ll achieve this goal, as the federal marketplace has many work opportunities for qualified contractors.

To Hispanic entrepreneurs in any industry who dream of working with the U.S. government, Miguel tells them that becoming federal contractors is going to help them tremendously. He cautions that it won’t happen overnight and requires a lot of effort, but the result is a large volume of work and is a beneficial business strategy.

Miguel López highly recommends Rafael Marrero & Company as a management consultancy and mentorship opportunity. He feels that the company treats him like family and is highly attentive to his company’s needs.

Contact us today to learn more about opportunities to become certified and do business with the U.S. government. Join Miguel and Eduardo as successful federal contractors thanks to the resources and support of Dr. Marrero.