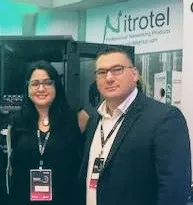 For Ivette Patterson, a Cuban businesswoman based in Miami, doing business with the US Government is her main goal. Her husband and also businessman, Juan Viera, works with her to achieve their common goal.

Working together and growing as Cuban immigrant entrepreneurs has not been entirely easy for Ivette Patterson and Juan Viera. However, this pair of entrepreneurs has shown that it’s not only viable to have common professional goals, but also reaching them together, as a couple.

According to what they told us, they met in Cuba 16 years ago, but he arrived in the United States in 1995, while she did so in 2011. Upon her arrival, Juan had already traveled a path into the business world, having started two companies: Mia Data Inc, in 2001, and Nitrotel International Group, in 2006.

The challenges in their story

Juan: I left [Cuba] looking for something better. I went to Spain for a couple of years and ended up in Miami, where I did a bit of everything. I worked in a telecommunications company as a logistics manager, I got a promotion for sales, but after I was promoted, the company closed and I lost my job. I didn’t have too many options: I had a career, but not enough experience for a proper resume. I studied Flight Engineering [in Cuba], which had nothing to do with what I could apply here, so fate forced me to embark on this adventure as a businessman.

Ivette: When I arrived [in the US], my idea was not to work together, but I had no choice, so I started to work with Juan [at Nitrotel International Group]. Due my background as a graphic designer, I started working on the catalogs design; I got involved with the product, with the everyday sales and, thus, we were also able to maintain our relationship as a couple and get along very well.

To date, this company offers more than 500 products related to the telecommunications sector (fiber optic, coaxial cables, equipment and tools, structured cabling connectivity, among many others) and its main clientele are in countries such as Dominican Republic, Ecuador and Colombia, to name a few.

Juan: When we launched Nitrotel International it was a difficult and complicated challenge. Initially, we began to locate manufacturers in Asia, Turkey and the United States, who would make products with the new patent that we were developing at that time. We had to deal with many details, however, because we inherited all the connections from my previous business [Mia Data], we ended up having a chain of distributors representing our brand throughout Latin America and the Caribbean.

Nowadays, 90% of their sales are registered precisely in those regions and the remaining percentage in the United States, and that’s something these entrepreneurs want to change. “We definitely want to balance out our equation; we have to balance it out or, at least, change the proportion,” says Juan and that’s what they are doing.

When and why Nitrotel Manufacturing

Ivette: A little over a year ago, it occurred to us to start a company of my own, Nitrotel Manufacturing, which is responsible for manufacturing and developing our products. So, basically this is the factory and Nitrotel International handles our sales. Our idea was to start a company to do business with the Government. Juan has been in the business for 20 years and I, as an independent business woman, as a minority, can do a better job reaching the federal market.

Yes, she talks about doing business with Uncle Sam. But where did the idea to make this transition come from? 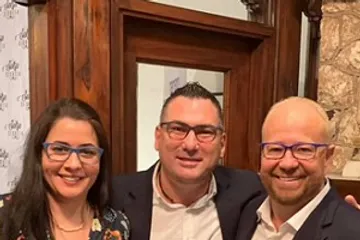 It turns out that one of their local clients told them how much their business had grown exponentially after becoming a government supplier. The same client also told them about an expert on the subject, Rafael Marrero, who has become a kind of King Midas of federal contracts within the Hispanic community, and for a good reason!

Rafael Marrero & Company, a business-to-government (B2G) management consultancy, won the 2019 Sunshine Award as Small Business of the Year from the South Florida Hispanic Chamber of Commerce, and is a two-time Inc. 500 honoree as one of America’s fastest-growing privately owned companies, and Inc. Best 50 workplaces in America.

With that type of guarantee, the renowned expert received the businessmen in his office on Calle Ocho (8th Street), a distinctive avenue for the Cuban community in Miami.

Juan: Rafael came up with idea, and with the help of Ivette, we immersed ourselves in the United States federal market. In our first conversation, we saw that her company qualified for certifications (HUBZone and EDWOSB, from the SBA, and WBENC WBE, from the private sector). For us, that was almost science fiction, it was something we did not understand at first. Rafael transformed our company’s image and profile, the Capability Statement. Now we are working with a completely different approach. We look for interesting prospects for Nitrotel Manufacturing and identify platforms according to that profile.

Ivette: Marrero has been a fundamental piece to obtain the certifications. Without him and his team, I would say this would have been impossible. He guided us in everything: how to become a government provider and participate in government projects; how to give the right approach to the website, how to design the right type of business cards, how to manage social media… In a nutshell, he’s been a key player in everything.

In the short and medium terms, Nitrotel Manufacturing main goal is to secure two or three main contracts, always with Marrero’s guidance, which according to Juan, “knows the industry and has the capacity and credibility in the field. He’s really exceptional. He is the type of person you want to work with on any project. Honestly, we couldn’t ask for more”.