As of 2016, it is estimated that there are now 11.3 million women-owned businesses in the United States, employing nearly 9 million people and generating over $1.6 trillion in revenues.

Women are now the majority owners of 38% of the country’s businesses, up from 29% in 2007. These firms employ 8% of the nation’s private sector workforce – up from 6% nine years ago – and contribute 4% of the nation’s business revenues, a share that has not changed over the past 20 years.

To be eligible, the business must be 51-percent owned by women of U.S. citizenship. It must also meet SBA size standards within its industry.

Business revenues among women-owned firms have increased by 35% since 2007, compared to 27% among all U.S. firms – thus at a rate that is 30% higher than the national average. 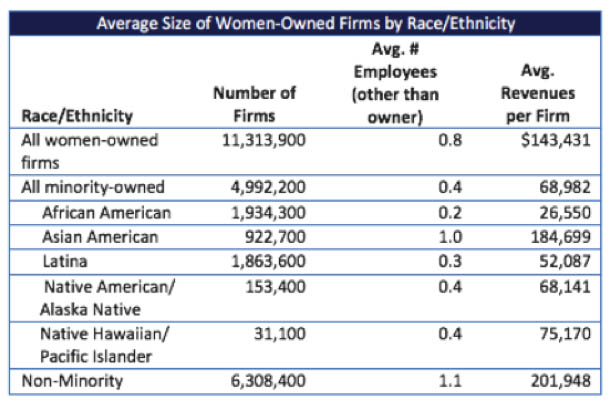 According to a study from American Express OPEN, the average small business owner, male or female, waits an average of two years and makes at least four bids before securing a government contract. Denise Barreto, owner of a strategic planning firm called Relationships Matter Now, bid on eight contracts before being rewarded on her ninth try.

In certain industries in which women business owners are underrepresented, government agencies set aside contracts exclusively for women-owned businesses. Set-aside contracts for services performed can award projects costing up to $3 million; for manufacturing, they can go as high as $5 million.

In many cases, third-party certifiers can help with WOSB certification, help them identify opportunities and explain the bidding processes. They can also help women determine if they meet income and wealth guidelines for the EDWOSB program. In addition, they can assist with other supplier diversity programs, including MBE certification.

Winning a federal contract can significantly boost business growth and provide opportunities for doing additional business with other government agencies.

Rafael Marrero & Company is a Better Business Bureau (BBB) Accredited Business with an A+ business rating.

Joint Venture Can Catapult your Business
A Woman Owned Small Business (WOSB) may submit an offer as a Joint Venture (JV) with another small business.
WOSB Are Revitalizing the U.S. Economy
Winning a federal contract can significantly boost WOSB growth and provide opportunities for doing additional business with other government agencies.

Recent Posts
Follow Us
“Positioning your Small Business with the World’s Biggest Customer"®.
COPYRIGHT © 2022. ALL RIGHTS RESERVED BY RAFAEL MARRERO & COMPANY.
NOT AFFILIATED TO, NOR ENDORSED BY ANY GOVERNMENT AGENCY.
Volver arriba